The idea behind the Static Maps is to generate a simple map view of an existing archive, which can then be shipped and deployed independently, requiring nothing more than a simple web-server. This is how it looks (© ESA): 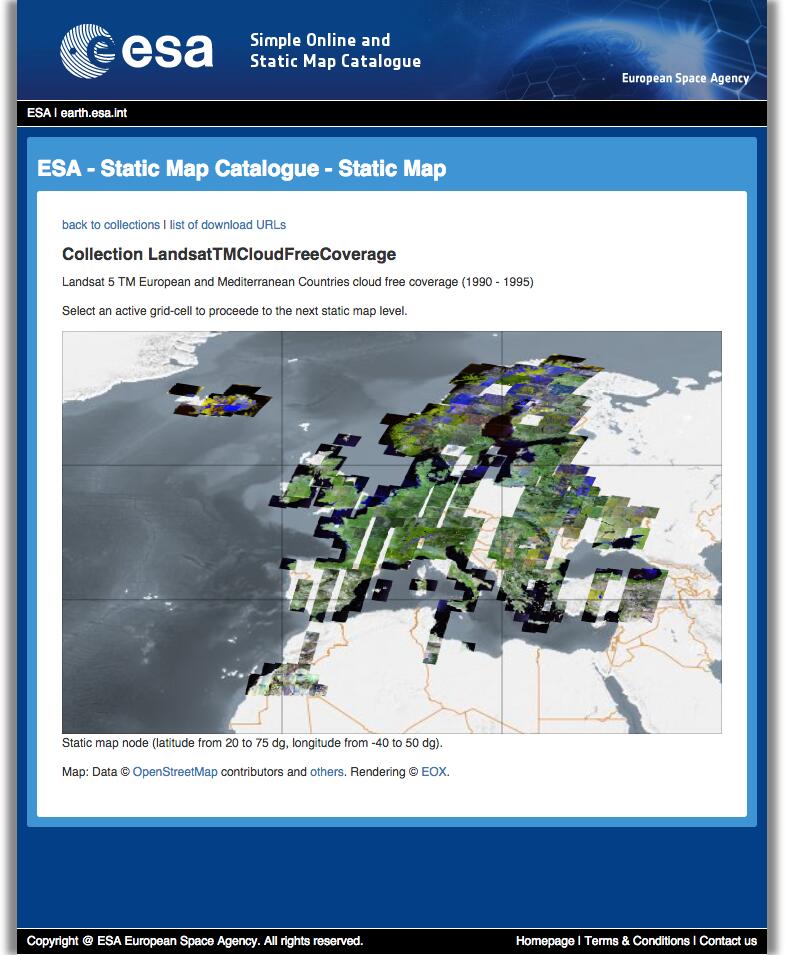 As you can see, the static maps consist of a simple web-view that can be navigated by clicking into the rectangular areas of the images that contain data. Areas that do not contain images are not selectable. The map can be navigated for three layers, at the end of which there is a result list of datasets in that area. This is slightly different for WRS and non-WRS collections, but more on that in a minute.

The actual "map-widget" of the generated maps might look a bit anachronistic and inflexible at first, but that is done on purpose: no additional web services are required, making the static maps robust and fast but still allow a quick and easy navigation on the map. If you don't believe me, try for yourself (opens new window)!

The static maps come in two flavors: the ones with an underlying World Reference System (WRS) (opens new window) and the ones without. The difference between those two is actually only visible on the deepest map level: the WRS type maps allow to select single WRS points (or associated footprints of those points) whereas non-WRS maps stick to the good old rectangles for the last level.

When we say WRS, we are not specific to the Landsat WRS systems: Sx-Cat supports all similar systems such as track/frame, or K-J system of the SPOT missions.

The last "level" of the static map is actually a list of scenes for that WRS coordinate or ultimate rectangle (in non-WRS maps). This list displays a configurable subset of the scenes metadata and also provides URLs for the full metadata, browse images and the complete product.

For convenience, each page of a static map provides a list of download links for all scenes contained in the current view. This can be used with browser plugins like DownThemAll! (opens new window) to easily download all products of interest.

The look and feel of the generated static maps depend on the configuration, and there is a lot of possible configuration options: the grid size, the actually rendered features (any combination of center point, footprint and browse), style and color of center point and footprint, etc. Each of those values can be set per level, allowing a really fine-tuned configuration for the desired maps.

Since static maps can get really crowded, we implemented two distinct methods of selecting WRS points on the last map level: by footprint and by scene centre.

The generation of the static maps is pretty fast: for example the Landsat ETM Cloudfree map was generated in roughly 10 minutes (not counting the download times) including 638 records on 473 distinct WRS locations. This is due to a number of facts: the underlying search engine and the efficient caching of browse images which are downloaded and reprojected just once. When no browses shall be rendered (just footprints or scene centers), the rendering is even faster by magnitudes. Regarding the search engine, I will go into detail when I demonstrate the SO-Cat in a later post.

As an additional bonus, all the scenes that contribute to a map are also sorted according to their cloud coverage value, when available. This results in mosaicked maps that are not only practical but also nice to look at (also on mobile devices!):

Map enthusiasts might have noticed the terrain background map, which is taken from our EOX :: Maps (opens new window) project.

Both Static Map and Simple Online Catalogue developments are part of the Payload Data Ground Segment (PDGS) Evolution programme of the European Space Agency for Earth Observation satellite missions, that aims to improve its overall PDGS capabilities and to allow the storage and dissemination of legacy missions as well as new and upcoming missions such as Sentinel-2. The role of SO-Cat and SM-Cat is to provide a lightweight catalogue service for visual exploration and metadata dissemination.