# Even less clouds than before

Due to the usage of atmospherically corrected data we can now present a much clearer and less hazier image of the Earth than ever before. However with just one year worth of data at hand we faced a difficult challenge again. Given that many regions are covered by clouds most time of the year. Just take a look at the map below which shows the median from a whole year worth of data from the Suomi-NPP satellite for the year 2018. 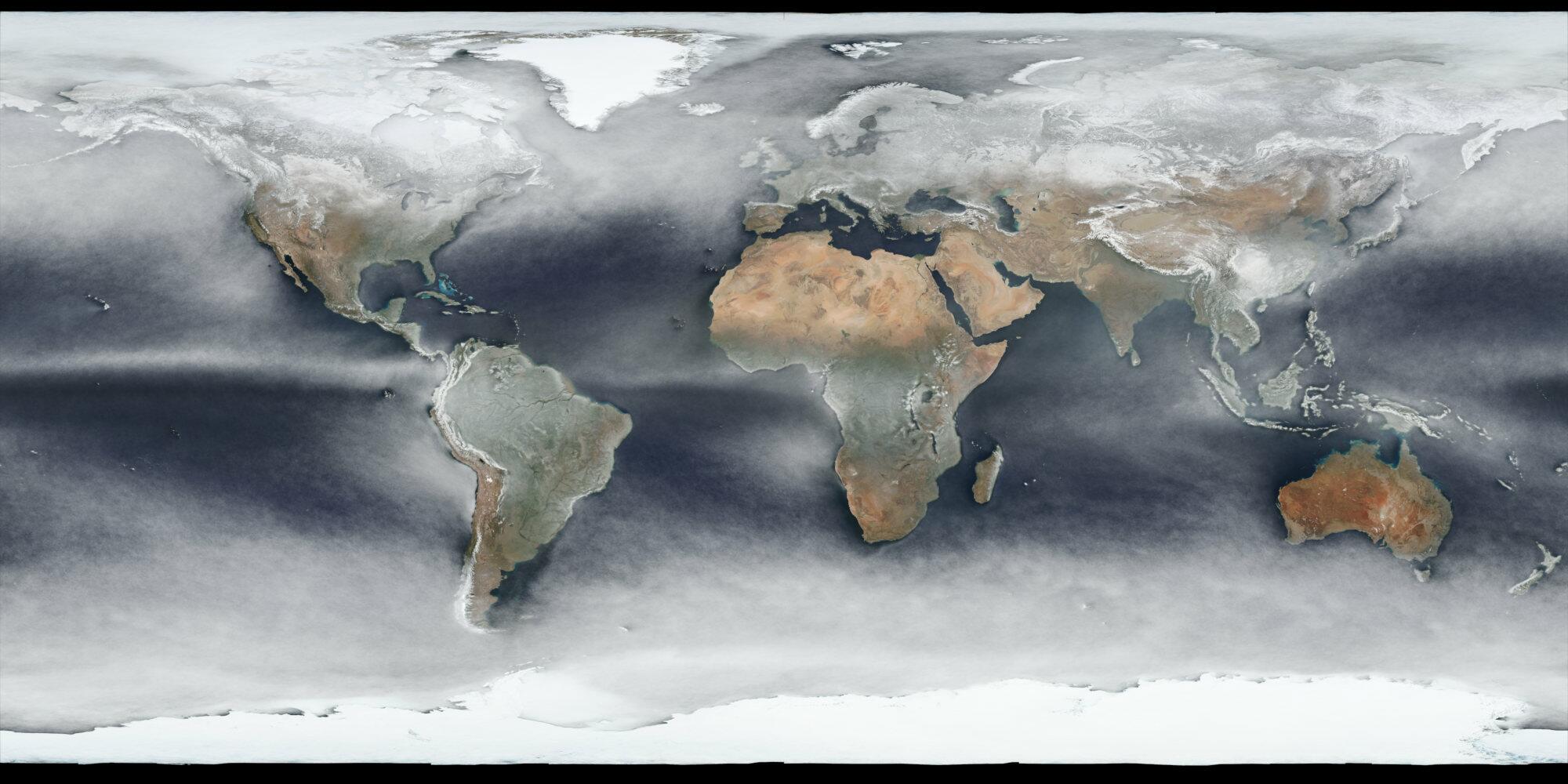 Some regions have white albedo all year long, apart from glaciers in the arctic, antarctic, and higher mountain ranges, the northern Andes, west coast of central Africa, and of course Indonesia are especially troublesome as the cloud cover around the acquisition time in some regions seems to be permanent.

To finalize the comparison this is the global Sentinel-2 cloudless 2019:

# Bottom of the atmosphere reflectance

One of the major changes is utilizing the Bottom of the Atmosphere (BOA) reflectance. This makes the values returned from the mosaicing more accurate in terms of dealing with the haze and other atmospheric effects. This upgrade is visible over the whole globe but the major impact can be observed over the tropics and subtropics. 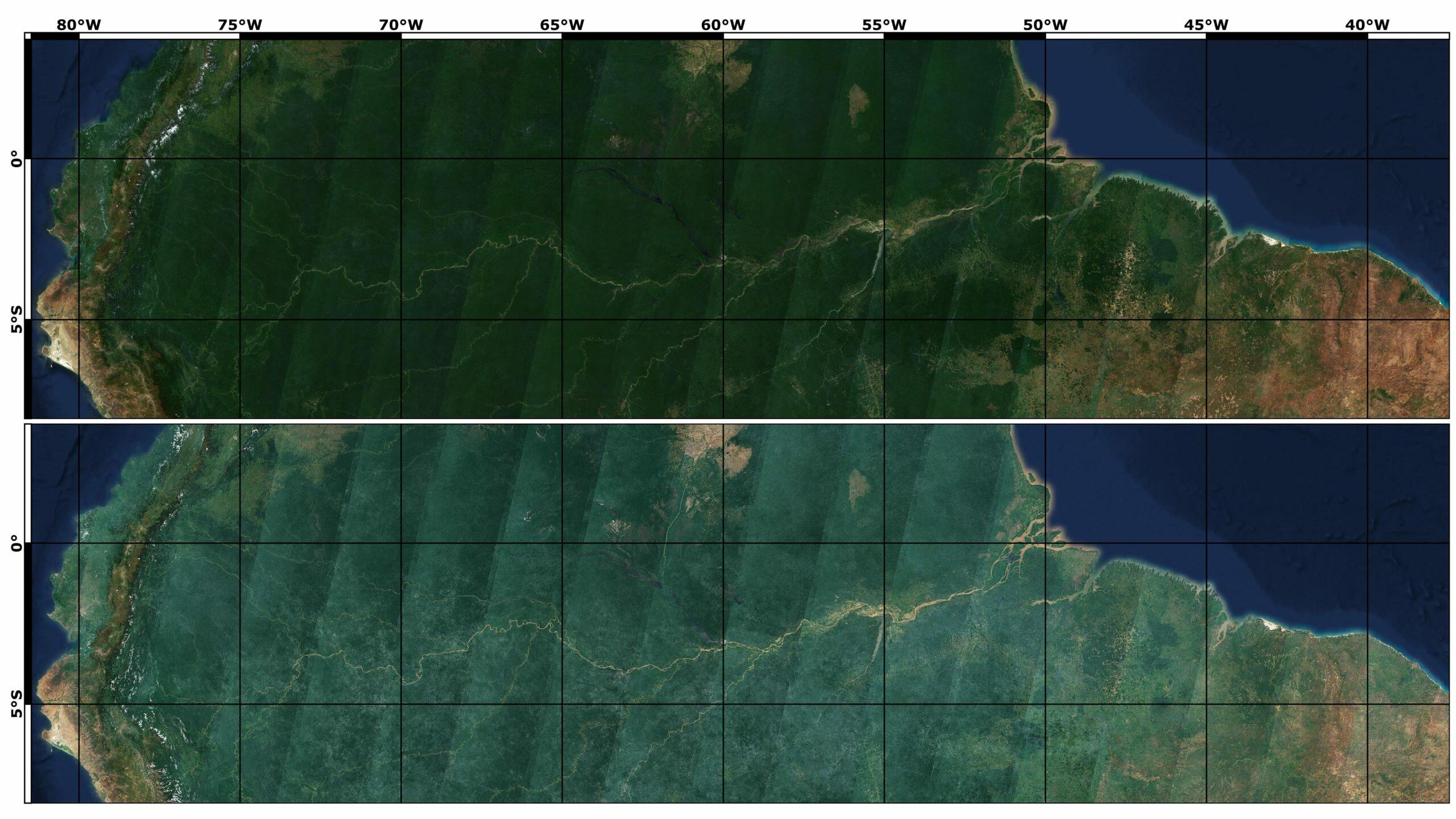 Finding the ideal time period from which to generate the satellite map is something quite variable and it is almost impossible to define a single time window for whole continents or even individual climate zones. As we can see in the image below the vegetated and not vegetated areas affect the reflectance directly, so that we are still tuning the optimal definitions for various regions and corresponding time intervals. As a rule of thumb, we try to keep the time window borders in the ocean or just along the coastline, but sometimes we do define the border going straight through the landmass. In most cases it lies somewhere in the subtropical zones.

With the changing sun zenith angle over the year some regions might appear brighter or darker, some objects will cast longer shadows with lower sun zenith. This provides better contrast especially noticeable with taller objects such as various landmarks and buildings, for instance the Giza Pyramids in Egypt. 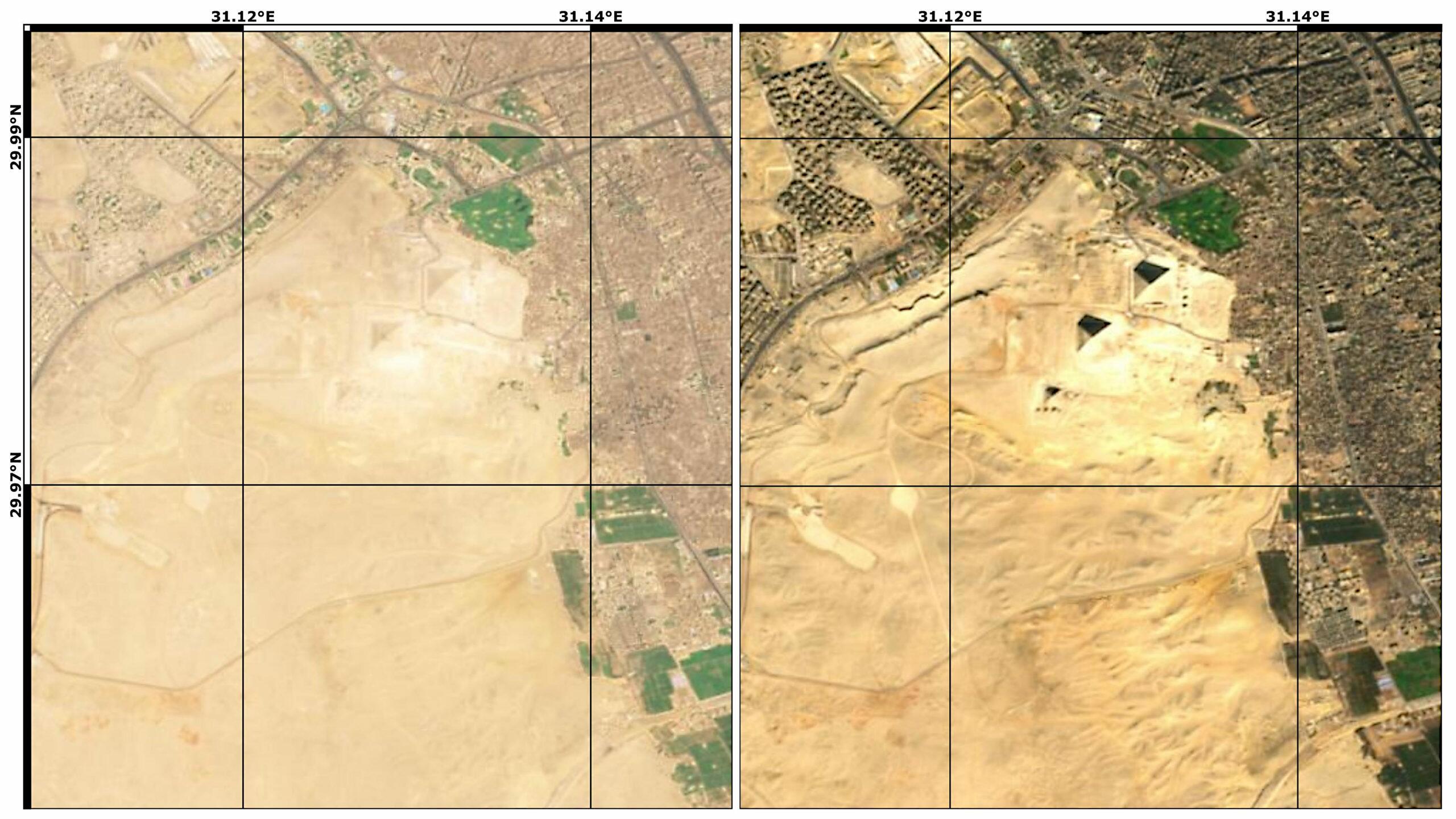 On the other hand sun and water present another dilemma on its own. In the summer sea surface often acts as a giant mirror. This causes large scale reflections of what seems to be white surface over the sea. A natural solution is to use measurements with lower reflectance. For processing the 2018 version of the mosaic we used the (north) summer months to process the Caribbean. For the year 2019 we used the (north) winter months for processing most of the northern subtropical regions. These reach up to the Mexico border with the U.S.A., whole Africa, through the Middle East, Hindu Kush, just north of the Himalayas, and through southern China. 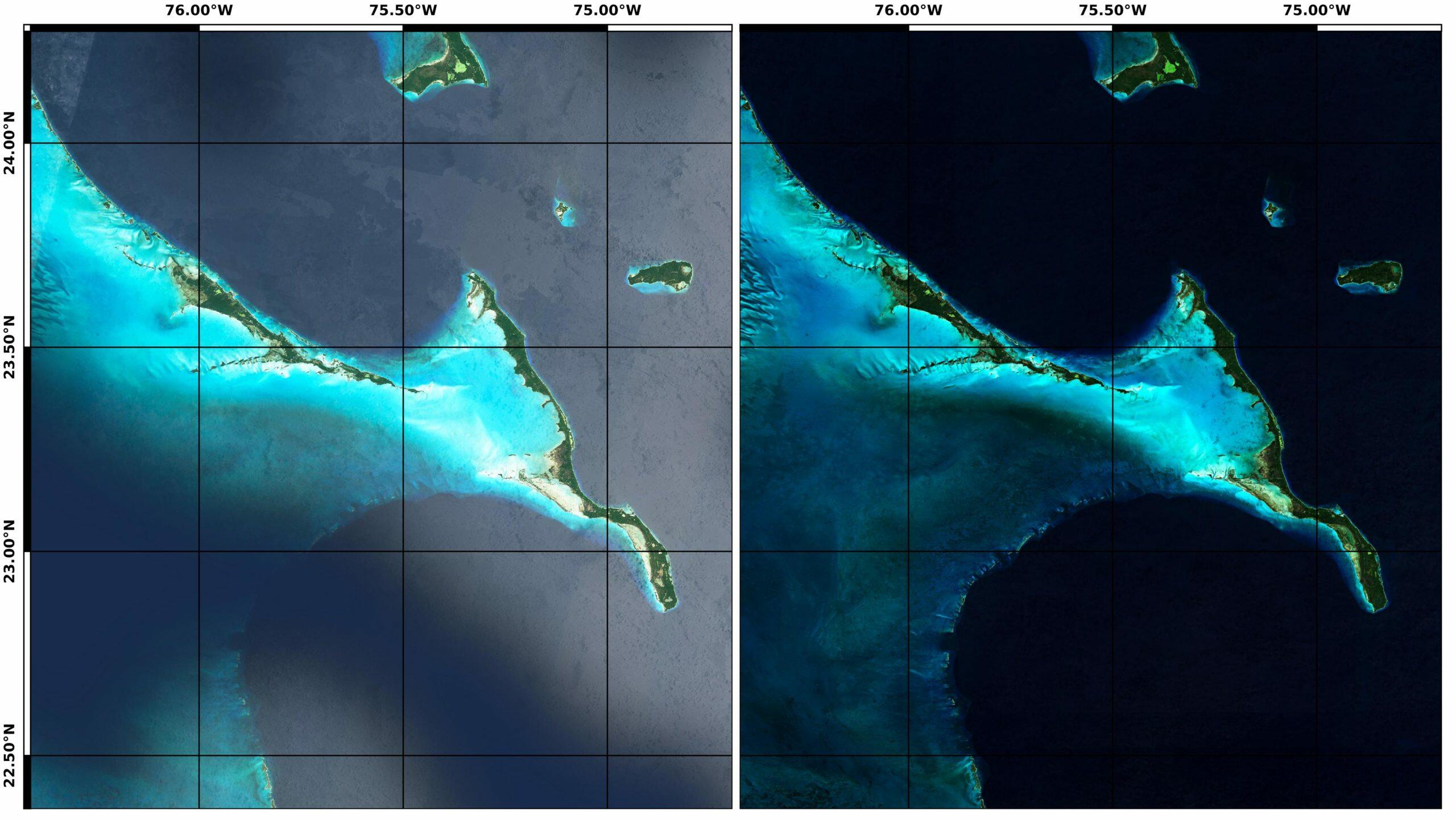 We all like nice images, that's why we do what we do, so the answer to the question is naturally: "More maps!". Our roadmap is to release yearly global updates for the foreseeable future to provide our customers a steady update and the possibility to track changes across the globe. Additionally we will keep improving the Sentinel-2 cloudless to offer an unique sight at our beautiful planet, so go ahead and take a look yourself: s2maps.eu (opens new window). If you are interested in using our maps commercially: cloudless.eox.at (opens new window) is the site you are looking for.

For commercial usage we offer the data (opens new window) under the EOX Commercial Attribution-RestrictedUse 1.1 License (opens new window) which is based on CC BY. The main change over CC BY is that EOX reserves the right to provide the data with this license. You're entirely free to use it in your services and products, you just can't transfer this license to your users. Usage examples include a WMTS you provide under your name or a product you sell that bundles the data for offline usage.